Most foxes are skittish creatures that will only go after prey smaller than themselves. Larger animals will often put them off and encourage them to go elsewhere in search of dinner. The question is, are goats large enough to discourage a fox and, in case they’re not, can they defend themselves or more vulnerable animals? 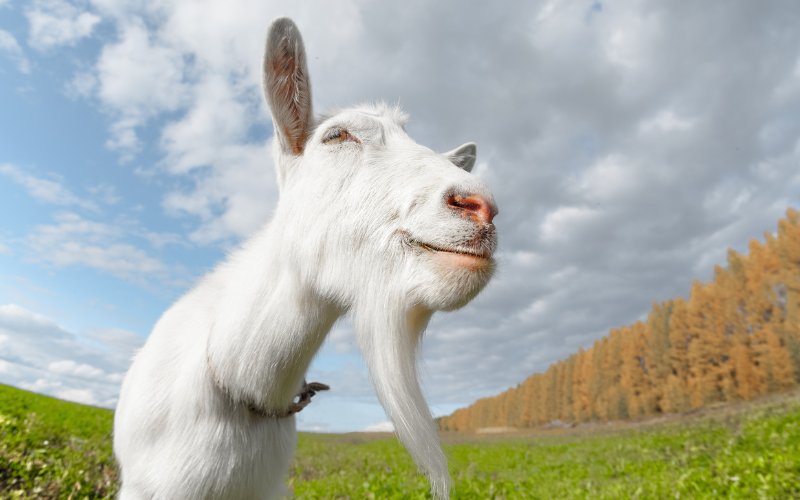 Will Goats Keep Foxes Away (The Short Answer)

Goats are not a type of livestock guardian animal. Goats are also not the type of livestock that will put up enough of a fight when faced with a clever carnivore to save their own necks, in most cases. Will goats keep foxes away? It’s a gamble, and one with poor odds for the goats.

Why Foxes May Not Be Scared Off By Goats

Foxes don’t like to hunt things larger than themselves. Goats are often larger than foxes. This does not mean, however, that a hungry fox will not attempt to take down a lone goat or two. In the spring, female foxes with pups can also become especially aggressive and are much more difficult to dissuade without employing an animal, like an LGD (livestock guardian dog), or an electric fence. Diseased foxes are also likely to attack anything and everything, regardless of size.

How Many Goats Would I Need to Solve My Fox Problem?

Goats are unlikely to solve your fox problem, assuming the problem is that you have vulnerable animals on your farm in need of protection. Goats will not protect them. Goats can only work as well as a scarecrow given that the goat is highly unlikely to attack the fox unless the fox goes directly for the goat.

If you accept that the goats will only be as effective as a scarecrow or any other element that can be rigged to flash or move randomly, then a herd of at least 3 wethers of a large breed with their horns intact would be your best bet. These will be the least vulnerable goats when it comes to a fox attack. However, these types of goats should never be penned with rabbits, chickens, or other small livestock as they are likely to trample them accidentally. They can be penned or tied nearby or let out to free-range with these animals but never kept in close quarters with them.

In short: do goats scare off foxes? No. Only by virtue of being further down the list on “what a fox will hunt” do goats deter foxes. Keep in mind that foxes are patient hunters and, though a goat may be nearby, they are still likely to hunt your rabbits or chickens. When they do, the goat or small herd of goats will be spooked and run off rather than defend the small animal in danger.

While foxes aren’t as much of a threat to goats as coyotes or bobcats, they can still be deadly. The average adult red fox is between 15 and 20 lbs but red foxes can get up to 30 lbs. The common Dwarf Nigerian and American Pygmy goat breeds weigh, on average 50 lbs when fully grown. This makes it just large enough to discourage your average fox from hunting it.

However, if you have a baby goat, a young goat, a small goat without horns, a lame or old goat, or a goat that has recently given birth or that is producing milk, you could still end up with a dead or heavily injured goat due to a fox attack. Further, goats are not likely to actively prevent an attack. Goats are also unlikely to gang up on a predator, even if you have a large herd of goats.

How Goats Compare to Other Solutions You Could Use

Goats are not a proper fox deterrent for a farm if you have vulnerable animals. This is especially true if you are actively breeding goats, have unique breeds like Dwarf Nigerian or fainting goats, or if there is a large population of foxes in your area. There are better solutions, both animal and not, to keep your livestock and farm safe from foxes.

Using an electric fence or net to contain any vulnerable animals, including young or small goats, is often much better than expecting them to protect themselves. Foxes will not tolerate any zaps from an electric fence, though they can sometimes slip through or use their fur to keep from coming in direct contact with the wires. This is why electrified poultry netting is ideal. If hung correctly, combined with a dig-proof barrier of some kind, this method of protection is nearly foolproof.

Better than even an electric fence is a fence made to be fox-proof. These fences are dug 2 to 3 feet into the ground with either a “lid” over the top of the pen or an overhang that tilts over the outside of the pen, preventing the fox from jumping up and over. Foxes cannot climb or hang upside down.

Unlike goats, dogs will scare off foxes. Livestock guardian dogs are meant to work in pairs, taking shifts patrolling and letting out a low, loud warning bark to keep predators at bay. These dogs will also defend the flocks they are in charge of. Healthy foxes will rarely if ever interfere with an LGD.

If you are considering getting a small herd of goats as a deterrent, consider upgrading that plan to focus on 2 or 3 miniature donkeys. Like goats, these animals will eat almost any plant and will stick with a herd of horses, sheep, or other livestock. However, donkeys will actively kick and trample foxes or other predators that come near. They also bray loudly when there is danger, scaring the predators or alerting you.

Above, I mentioned that goats are just about as effective as scarecrows at keeping foxes away. This is because a goat will not actively attack but will simply wander around being a somewhat-large animal. A scarecrow in the form of flags, wind socks, windmills, and scare tape can do a similar job. Motion-activated flickering lights or strobes can do this, too.