I’ve only ever met one person who liked the smell of poop – specifically horse poop. For the average homesteader, myself included, examining any sort of manure really isn’t the most enjoyable part of farming. But it’s quite an important one. Of course, poop naturally comes along with every type of farm animal, including chickens. As a bonus, poop can also be quite a practical and inexpensive fertilizer for the garden.

Poop may look different depending on the time of year, but it should always look healthy. Think of it as an indicator of potential problems. If you know what chicken poop typically looks like, changes in color, like green and blue chicken poop, may warn you of an infection before it can spread to your whole flock. 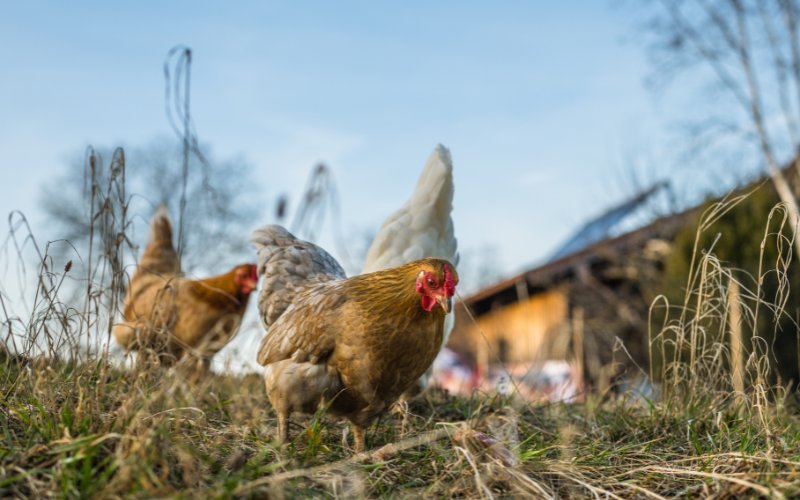 What Does Green Chicken Poop Mean? Should I Be Concerned? (The Short Answer)

If you free-range your chickens and they seem pretty healthy, green chicken poop is normal – it’s probably caused by the greens, veggies, and leaves they recently consumed.

However, green chicken poop may also be caused by a sickness such as Newcastle disease or fowl cholera. Poop may also turn green when a chicken isn’t eating or drinking enough.

Whether you were worried about it or not, the first time you saw green chicken poop was probably a surprise; and, like me, you probably wanted to know the reason why. With some light research, I’ve found that light and dark green chicken poop could be both quite normal or a reason to worry.

Your Chickens Are Eating Their Veggies

If you free-range your chickens, they probably eat a lot of vegetable material like leaves, grass, and seeds. Veggies like these can cause bright green chicken poop. This is likely the cause of the color if your chickens don’t appear to be suffering from any other symptoms, like lethargy or a decrease in egg production.

Chickens may refuse to eat or drink enough for a variety of reasons, whether they’re being bullied by their coop mates, they’re not receiving enough grain for their age and size, or they’re suffering from a disease. Green poop could be a symptom of this problem.

The science behind this is simple: bile is secreted to the stomach to digest feed that isn’t there. As a result, it gets passed with the feces, causing green-colored chicken poop.

Your Chicken Is Suffering From a Disease

If your chickens have watery green chicken poop, it’s likely that they’re suffering from some disease. Immediately remove affected chickens from the flock and try to determine the disease they have by watching for other symptoms and/or consulting a vet.

What to Do If You See Green Chicken Poop (4 Ideas)

If you start to notice green chicken poop, first try to figure out the reason to determine what your plan of action will be. If it’s simply veggies that are causing the color, your chickens are fine; but if they’re suffering from a sickness, you should get help.

Keep An Eye On Your Chickens’ Poop

If you think green poop is simply the result of free-ranging your chickens, you don’t have to do anything. However, it’s a good idea to keep an eye on your birds’ poop to make sure nothing changes about it. Also, watch your chickens to be sure they don’t develop other symptoms.

If you don’t free-range, your chickens have never had green feces before, or they’re experiencing other symptoms, something else is probably going on.

Keep an eye on feed and water levels and make sure your chickens are eating enough for their size. I like to provide a set amount of feed every morning and afternoon, adjusting as necessary, so I can get a feel for what they require on a daily basis.

Not eating enough is likely a symptom of another problem. Watch out for bullied chickens that are smaller than the others and have pecked feathers and skin. These are signs that a chicken isn’t getting enough feed because larger chickens are taking it all. Unfortunately, this happens quite often in my experience, but there are a few solutions you could try:

If your birds are displaying other symptoms, it’s a good idea to check out common chicken diseases that could cause green poop. These include:

If you think your birds are suffering from one of the above diseases, quarantine them right away and deep-clean and disinfect the coop. These infections are all highly contagious and could take out your whole flock.

Before you give your flock a drug or vaccine, it’s a good idea to check with a professional just to make sure. Also, if you continually struggle with these viruses or you want to add to a flock that has suffered from them in the past, consider purchasing vaccinated birds. 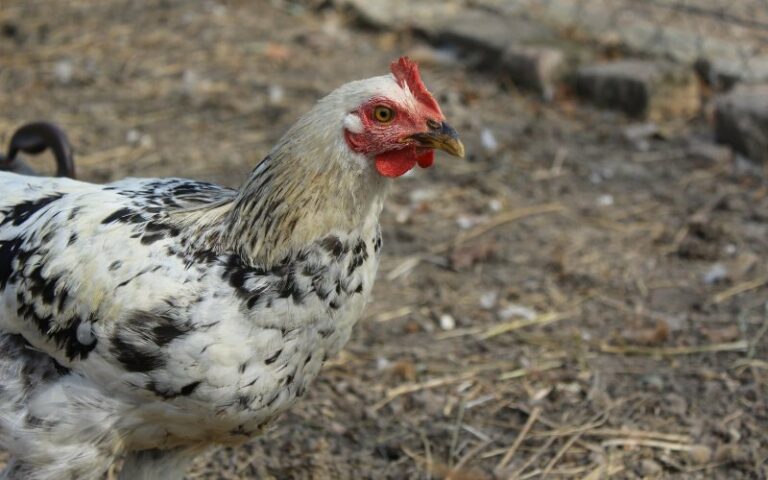 Blue is the world’s favorite color, but besides the sky and the ocean, it isn’t a color you often see in nature. That’s probably why blue chicken poop is such as shock – the first time I saw blue chicken poop, I definitely did a double-take. Blue poop might look concerning, but it’s not always… 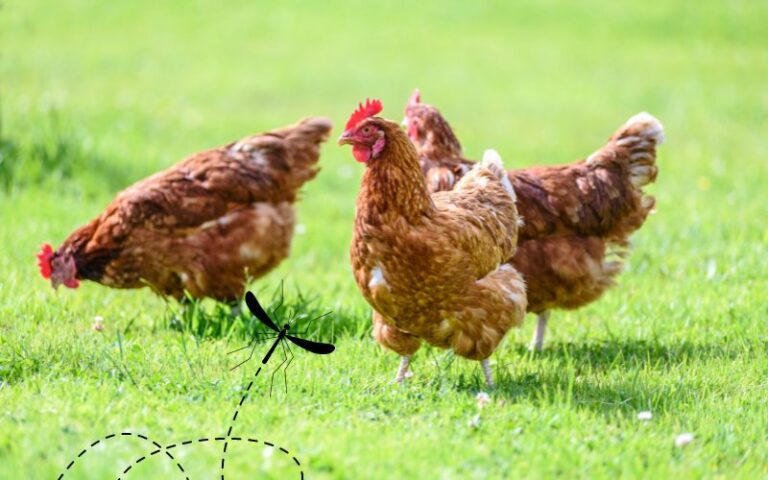 If you live in an area that has a lot of mosquitoes, you’re well-acquainted with how annoying they are. Mosquitoes are, in my opinion, the worst insects of all time – and I also happen to believe that strong bug repellent and mosquito netting might be some of the best inventions ever made. Mosquitoes can…

Chickens typically walk with jerky, alert movements. A dizzy chicken is sure to stand out from its strutting, pecking coop mates. My chickens have quicker reaction times than I do, so I would definitely be concerned if they started losing their balance, stumbling sideways or backward, or otherwise acting drunk. If one of your chickens… 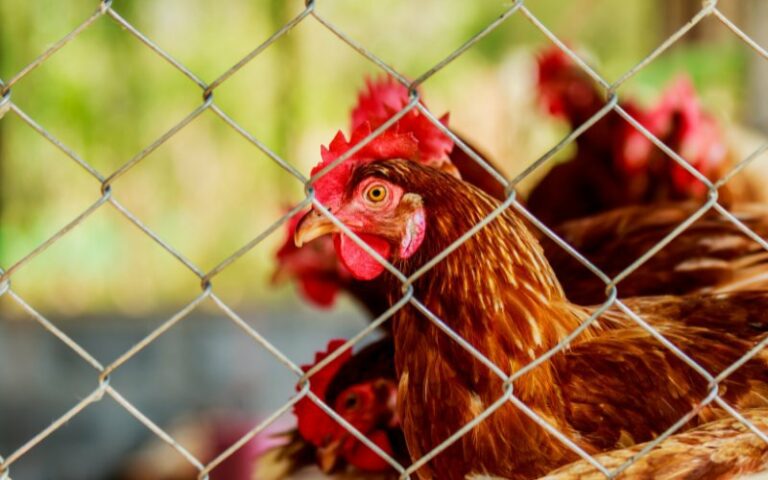 Chicken fences come in a range of heights from 2-foot-tall rolls of plastic poultry mesh to rolls of welded wire 6 feet or more in height. How do you choose the right fence, at the right height, for your flock? Below you can learn the “easy answer” as well as the 7 factors you should… 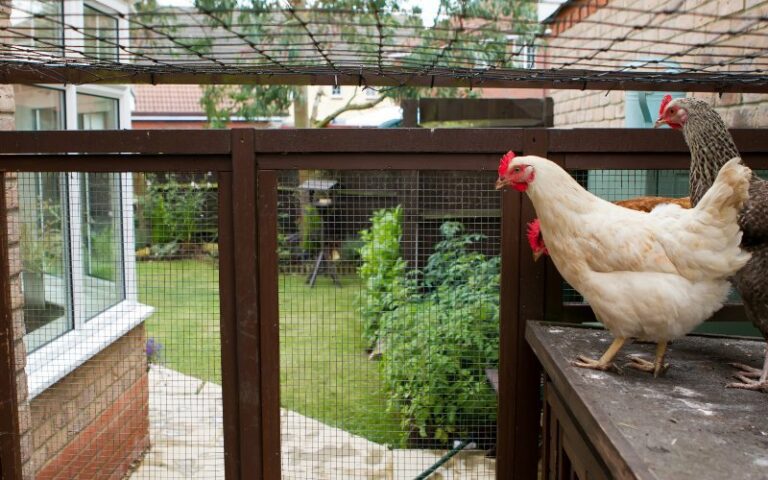 Putting a “lid” on your chicken run can seem like a step you don’t need. We all know that chickens can’t fly and with a roof over the entire run, will they get enough sunlight? I’ve had flocks free-range, in pens without roofs, and in runs with roofs of different kinds. After all of this,… 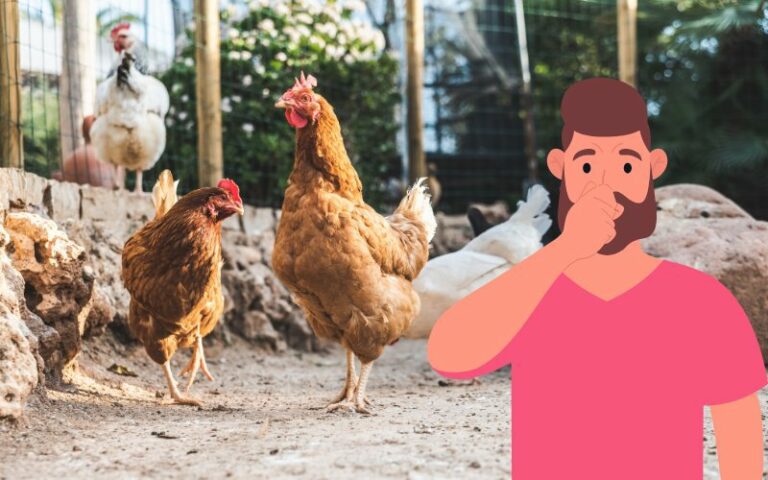 I love the way baby chicks smell, and I’ve always thought that adult chickens have a nice barnyard-y scent to them. But have you ever had the experience of walking past a chicken coop and nearly gagging on the horrible stink? I certainly have, and so have many other chicken owners. For a while, I…